The First Mobility to Romania!

All partners, namely Greece, Latvia, Germany, Turkey, Spain and France visited Cimpani, Romania between 11-15th of November, 2013. At the arrival, the Romanian teachers, parents and students showed so much of a warm and kind welcome at school and we held the socializing event. Just after the refreshment and the welcoming speech of the host teacher, Denisa, the host students and their parents met and took their visitors their home.

The day after, partners came to school and hung their logos and posters for the contest. Each school gave a presentation about their school and country, so that students and teachers had a chance to know each other more. After that, we all went to the community center of Cimpani and watched the great programme prepared by the host team. During the programme, the partners had the opportunity to listen to both modern and traditional songs and watch folk dances. Not to mention, the coordinator, Apostolia Karra, the headmaster of the host school and the mayor of Cimpani also gave a speech. We all went back to school then and finalized the logo & poster contest. Turkey's poster got number one among other posters by vote and Latvia's logo got number one among others in the same way.

Next day started earlier than the day before; since we had a long way to go to Timisoara, a city which is historically important. During our visit to Timisoara, we visited an open air museum introducing old houses of Romania, tasted local home-made food, saw historical buildings, provided with invaluable information by a tourist guide, and went into the Orthodox Metropolitan Cathedral of Timisoara. We also learned that Timisoara was the place where the uprising against Ceauşescu in 1989 happened.

The day after the visit to Timisoara, we first went to the Townhall of Ştei and watched a slide about copper mining. Being a rural area at first, copper mines gathered approximately 25.000 people there, which is an overt effect of natural environment on culture. Our hosts gave precious souvenirs that are both local and hand-made. Afterwards, the teams went to the Bear's Cave, which was found by chance by a miner in 1975. It was fantastic and so deep and the students were very much attracted by the natural beauty of it. Then, the teams visited the entographic museum where one can see how humanbeings transform the environment according to their needs. Finally, we returned back to Cimpani and gathered together at school to have the meeting. In the meeting, the teachers and headmasters discussed the results of the mobility and planned the next mobility to Turkey.

If you would like to see some photographs, here you are:

Posted by ertangil at 4:21 PM No comments:

"Culture and Environment" is a European Union Life-long Learning Programmes - Comenius project focusing on the effects of the environment on the culture. It will last for 24 months and finish in June 2015. Throughout this project, the students and teachers will be engaged in many activities concerning the nature and cultures. There are going to be seven mobilities in total, to Romania, Turkey, Germany, Latvia, Spain, France and Greece, respectively. Each country will attend in mobilities both with teachers and students. Here on this web page, you can find information about the mobilities and take a closer look at the products of the project. You can contact the project co-ordinator via this e-mail address: mail5gym@yahoo.gr 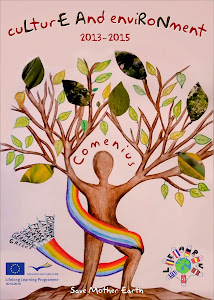 This project belongs to: